What did you do today.

I got some work done on my first Riptide. (The Y'Vahra doesn't count right?)
I barely primed it yesterday and managed to get some paint on it today. In retrospect leaving the arms, jet packs, and leg armour off might have made painting all the black bits easier. Also I'm glad I have an airbrush to prime/base coat with, given how terrible the weather is these days.
Other than that I'm trying something new with the base and it looks decent so far. The explosion crater isn't very convincing but I'm hoping that some dry brushing might help with that. Hopefully I can get the panel lining and secondary colour painted tomorrow. 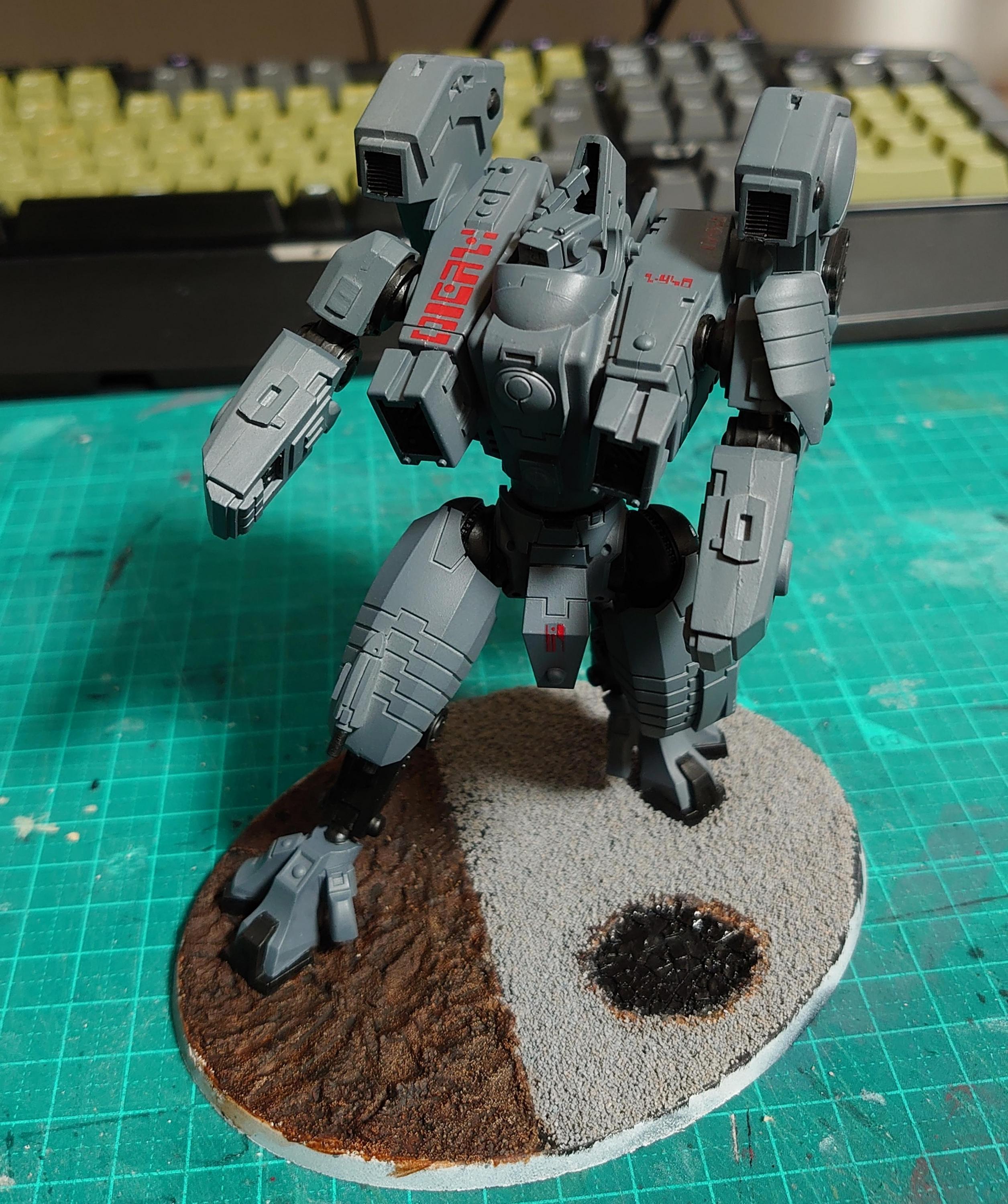 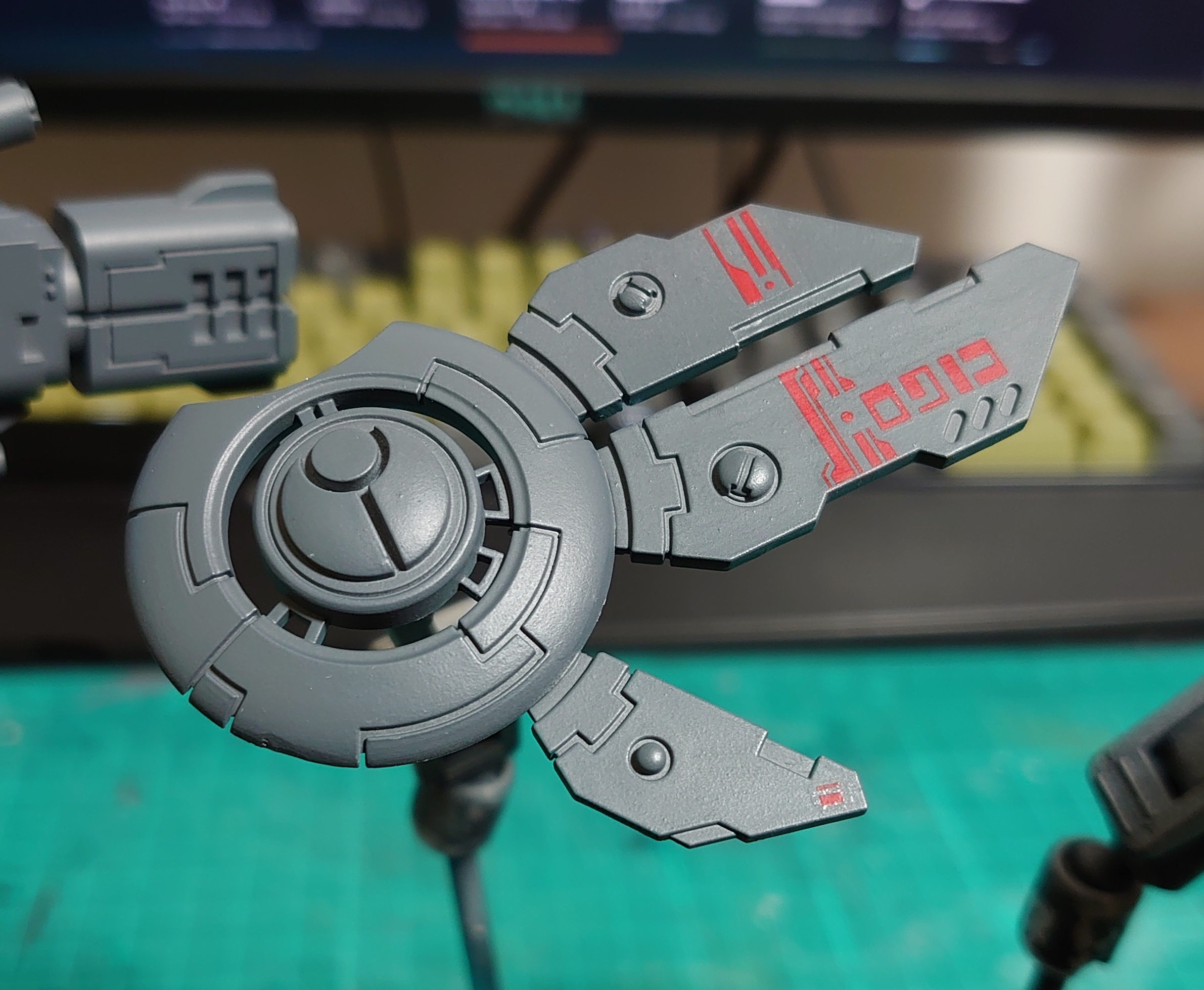 That looks so good that drone bodyguards would only cramp its style! 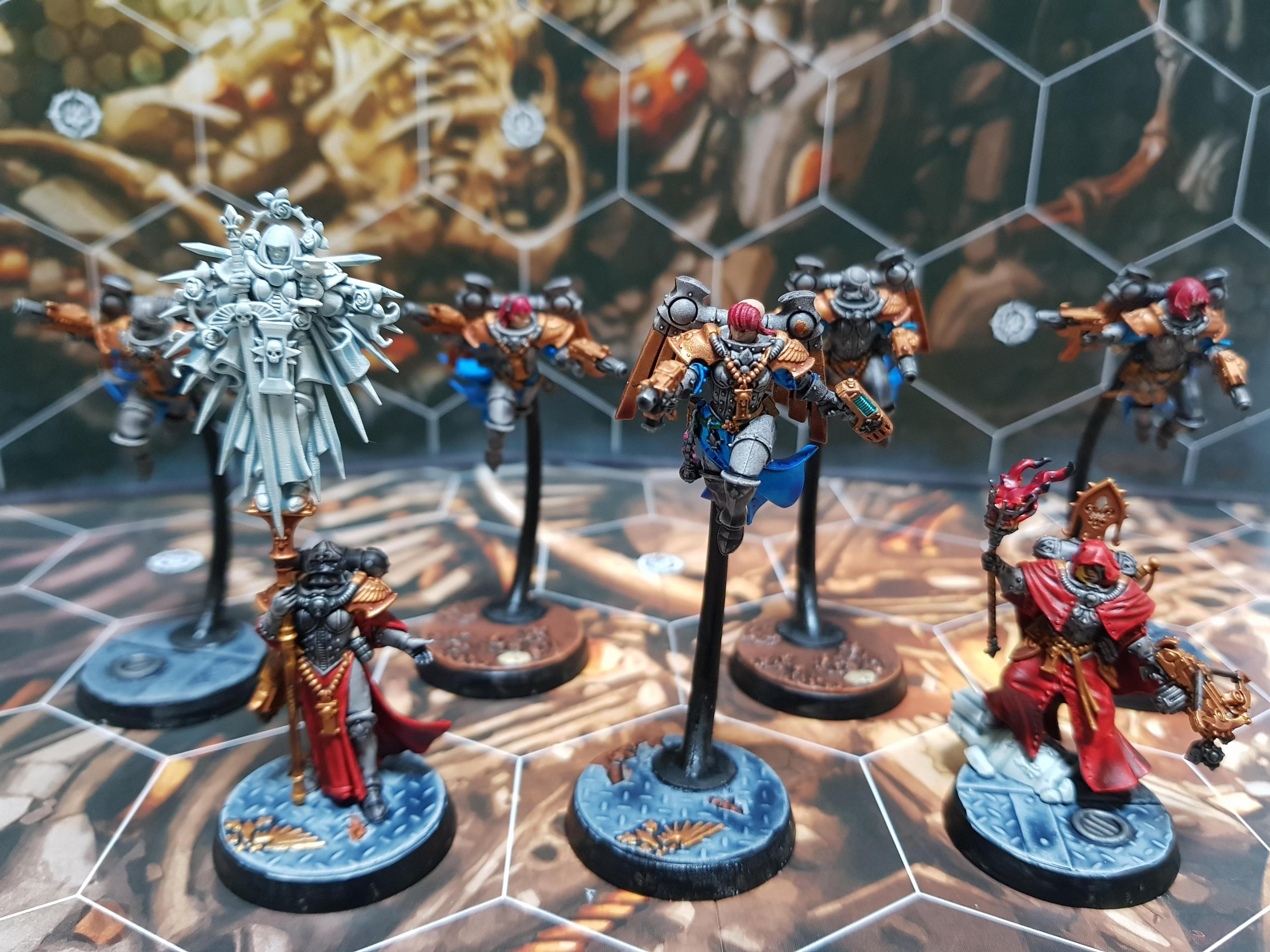 A Riptide with a swarm of drones is a magical sight, you just to believe in the Greater Good.
Those sisters look pretty fly. Too bad the fly rules got nerfed or they would be fun to charge stuff like tanks with.

I got a bit more work done on the Riptide. Got a few more colours in, did most of the panel lining but it still feels like there's a lot more that needs to be done. Can't wait to actually be done with it and I think I'm making decent progress so far.
Also, magnetized guns are the best and Tau guns are the most fun to magnetize. The AT line is a close second since a lot of the models don't even need any drilling. 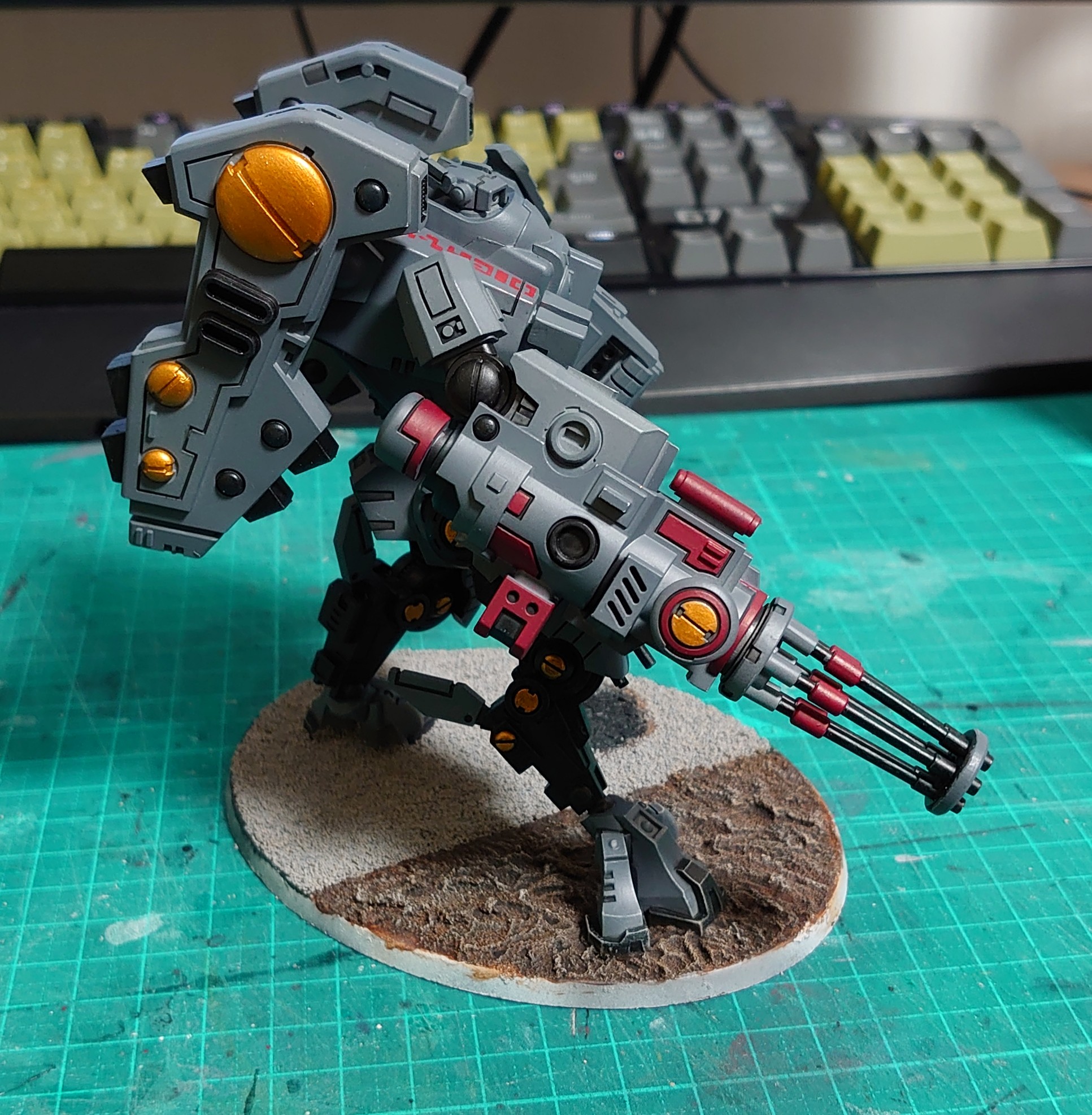 Nothing beats a cleanly-painted giant robot, I tell you what. 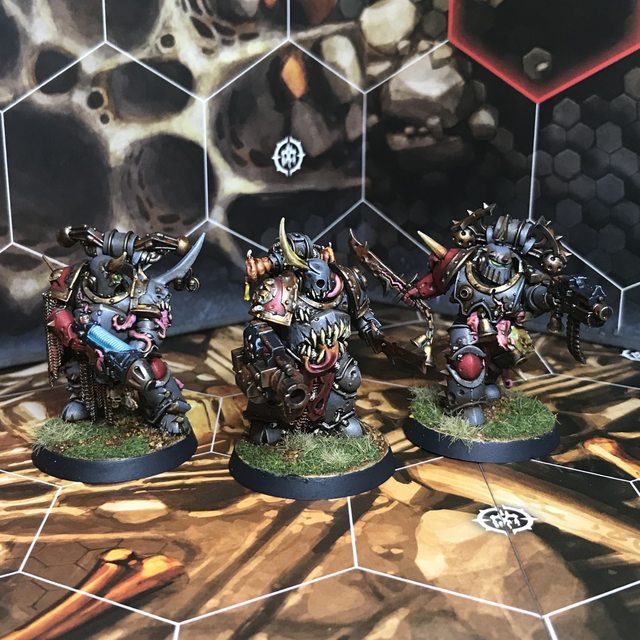 Every batch I do gets a little filthier and I keep loving it. Finally figuring out a nice rust finish helped a lot. And the plasma gun* officially sets my first 25-power list to "fully painted": 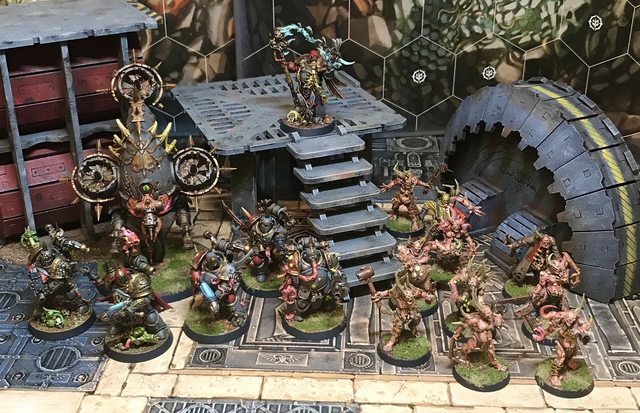 Hopefully I can get the full 50 power done by launch day so I have some list options - really, along with "fully painted plague marine squad not pictured in this film," that's only 4 more (rather large

) models, so it should be doable. Then the last couple bits of terrain and I'll be golden.

*Random story: Back in college, I had a friend who hated the fact that Ork guns were called "shoota" and "slugga" and whatnot, and insisted on calling plasma guns "plasmer guns" to retaliate. I still have to fight the urge.
Feel free to call me Dave!
-----
Miniatures painted in 2020:
AoS-iverse: 87 infantry
40K-iverse: 68 infantry, 2 vehicles, a whole mess of terrain
Adeptus Titanicus: 1 Titan
Top

Painting filthy scares me a lot more than painting clean and your Death Guard army looks the part. The only thing potentially missing would be some classic Nurgle-ly boogers. Nurgle's Rot (the technical paint) is supposed to do that right? Either way, even without that I think they look good. Its awesome how the Poxwalkers blend together when placed in a group and it really gives off the zombie horde vibe.

Also since we already have Bolters and Flamers, it should obviously be Plasmers, Missilers, and Melters. Lets just not add the same logic to melee weapons or Terminators with Power Fists might get an unexpected buff.
Top

Hey everyone. It was good seeing you all at the game day last month. Robots, Icky Marines, more gribbly things and Sisters of Battle - lovely to see everyone picking up brushes and hobbying.

I got motivated again and picked up my brush - the first time since finishing off the Exodites. It has been long enough that I had to throw out quite a few paint pots that had succumbed to the perils of time unloved and unused. Actually the paint I ended up trying to salvage was thick enough that I had to thin it with medium to get anything good out of it.

Chose to go fantasy with the first toe back in the water. Forgot to finish off the back of the weapon, and the highlights and shades are a tad rough but as Prim would tell you, I could have been an Emperor's Child - though I myself like to call it Vulkan's dedication to the craft rather than Fulgrim's pride.

Hmm...why didn't I paint a green Knight then 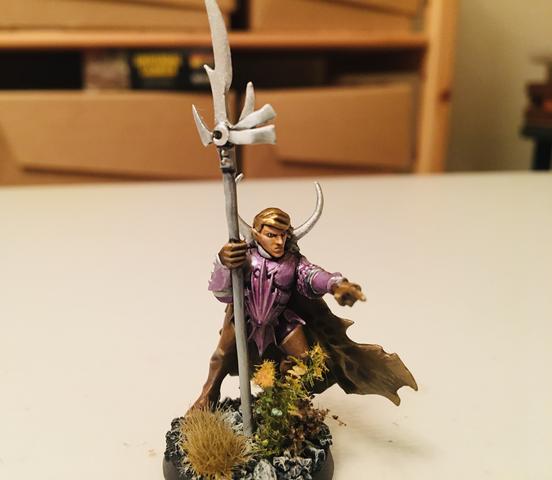 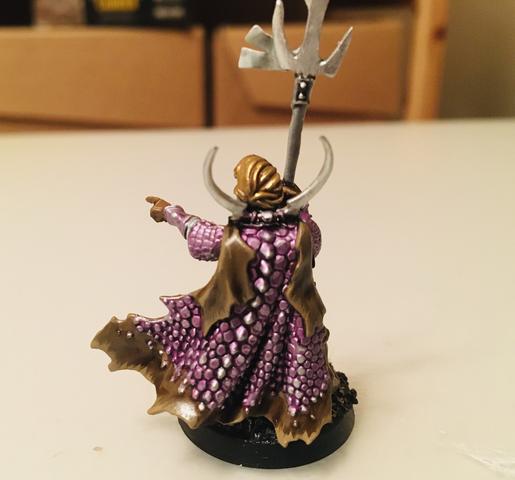 Wow, these look great guys! Almost makes me not want to post my own stuff.

Are you guys mostly using contrast paints? I just recently got back into the hobby and they're completely new to me. They look like they work really well though.

Today I got one of my weapon teams finished. That's two down, so just one more to go. 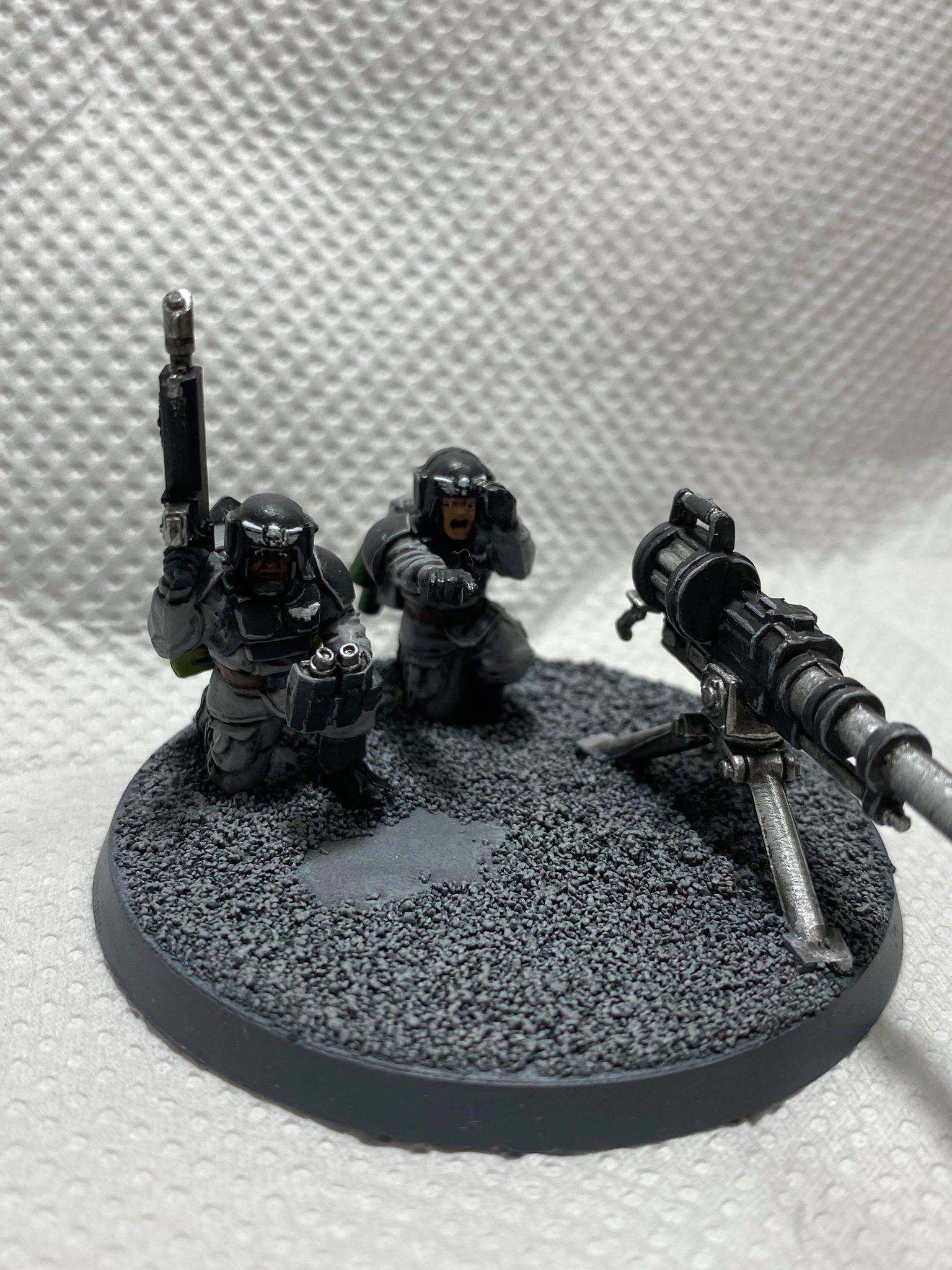 @koji - looking good! Nice to see you back on the wagon.

Are you guys mostly using contrast paints? I just recently got back into the hobby and they're completely new to me. They look like they work really well though.

I believe Jye is using mainly Contrasts for his sororitas, and my plague marines are a mix of Contrast and traditional, but I've had a lot of success with pure Contrast paint jobs - they're really the business for quick, colorful, nice-looking paint jobs, and it only takes a little extra effort to push them over into "really nice," too.

The guard look good! "X down, Y to go" is sort of their neverending mantra though, isn't it?

@koji - I love the the dragon scale cloak and I'm sure the highlights look perfect on the tabletop.

@Matt - Keep the pictures coming. Its always nice to see everyone's progress and it for sure motivates me to paint more. Also adding to Dave's comments about Contrast. I think the Contrast paints are pretty handy and they have some interesting unexpected uses. Personally I'm a huge fan of contrast on metallics. Its a quick way to get less conventional colours of metallics.

I finally got my first Riptide to a level I'm comfortable with fielding it in games. I'm probably not going to put it in any lists anytime soon but its good to get it out of the way. Next I need to focus on making sure that my Crusade lists are fully painted. My resolution for the new edition is to only field painted models, which shouldn't be too hard at low point levels.

(Don't worry I haven't forgotten the base rim.) 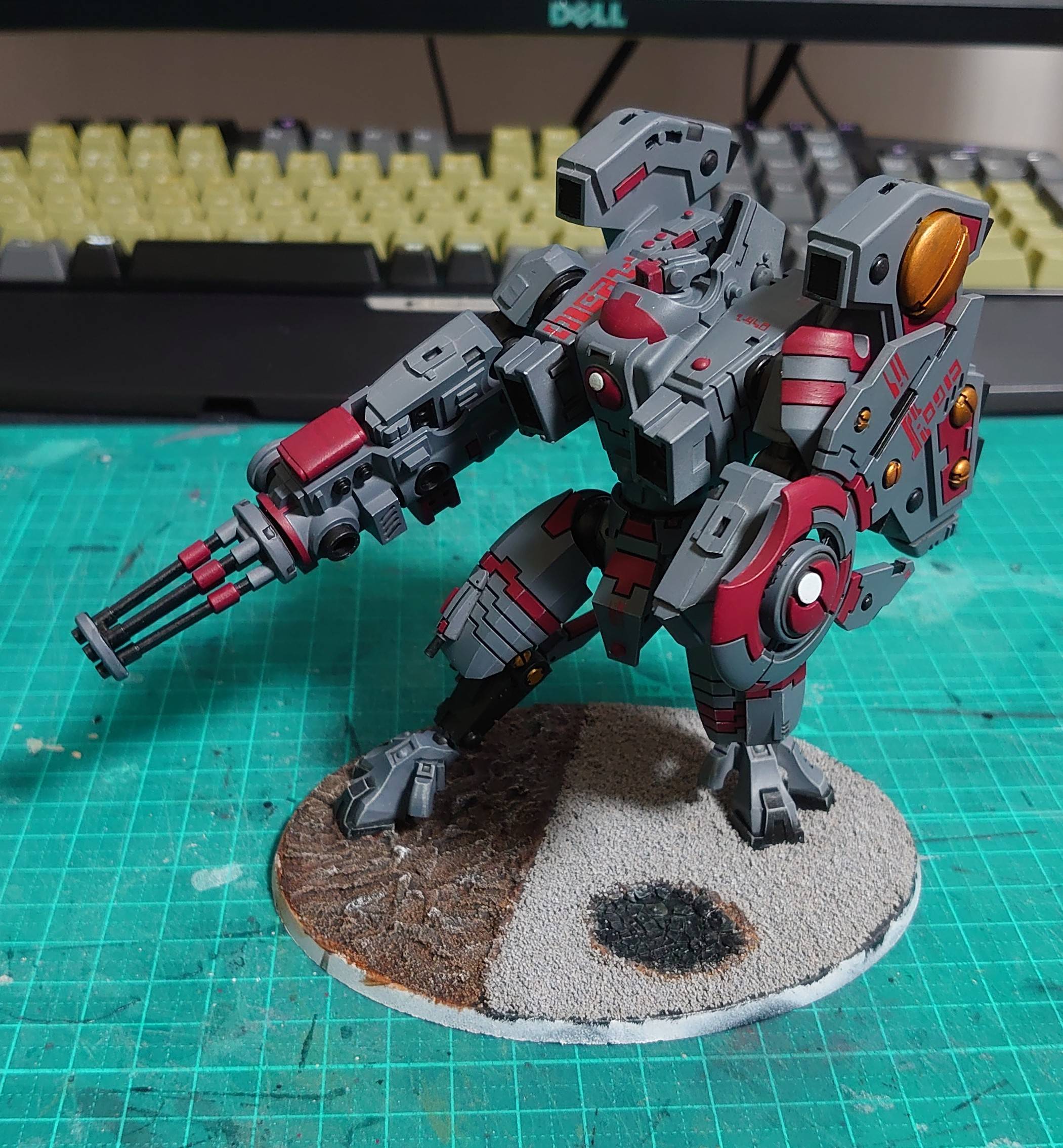 Return to “Painting and Modelling - ペイント”